This order of birds of prey includes hawks, eagles, snake-eagles,  harriers, vultures and kites but not falcons. There are 4 families in this order. We will introduce 3 different families to you.

Africa is a paradise for birds of prey lovers. Not only occur many species, but also there can be a quite high density.

Birds of prey are from small to large. Their diet varies from insects to small antelopes, fish, snakes, rodents, birds and carrion. Each species has its ecological niche and some are quite specialized in their diet and the way they hunt.

Characteristic in all birds of prey is the hooked beak with a sharp tip and the strong tarsi with tough claws.

For sure birds of prey are always an attraction and observing them is a great pleasure. They can just sit on a branch, soar or fight over food. Most of them are very territorial and defend the borders vehemently against intruders. Young birds of prey are tolerated up to several year when they reach adulthood and their plumage expresses this. A Bateleur for example is a full adult with around 7 years and before that it is a plain brown bird which hinders the territory holders (parents) not to consider it as a competitor. Young Bateleurs feed on carrion and change diet when growing up. Young or immature birds of prey are often difficult to identify.

Some birds of prey live in pairs, others solitary and find a mate for the breeding season. The females are mostly larger than males. Sexual dimorphism in color is mainly minimal.

Osprey – Family Pandionidae – consists of 2 species and several subspecies. They are fish eating birds and scales on their feet assist grabbing slippery fish. They are nomadic and sedentary. Osprey (Pandion h. haliaetus) is fairly common at water bodies with fish. Many are migrants. Photo by Lorenzo Barelli

Black-winged (former black-shouldered) Kite (Eleanus c. caeruleus) is a small bird of prey spread over Africa in savanna with trees. It can be locally very common.

Black Kite (Milvus m. migrans) is a common migrant to Africa between October to April. It can be recognized by the black beak tip. Photo by Jacques Pitteloud

Yellow-billed Kite (Milvus aegyptius parasitus) is very common and abundant in and around villages and towns South of the Sahara where they feed on openly dumped waste but also hunt rodents.

“True hawks” – Subfamily Acciptrinae
this might be depending on the author of researcher but in this family are hawks, eagles, buzzards, vultures and relatives

African Fish Eagle (Haliaeetus vocifer) is found at lakes and rivers with fish and tall trees in Africa. Once you hear the voice of Africa you won’t forget it.

Palm-nut Vulture (Gypohierax angolensis) is found in areas in Africa with palm trees. They feed on palm fruits but occasionally also take carrion.
Depending on the author subfamily Gypaetinae

Egyptian Vulture (Neophron p. percnopterus) is sadly endangered and rare to spot. The distribution is mainly in savannahs in Northern Africa, the horn of Africa and East Africa. Intra-African migrant. Photo Lorenzo Barelli

Depending on the author subfamily Gypaetinae  (also Egyptian Vulture)

Subfamily Gypinae – some of the old world vultures

Hooded Vulture (Necrosyrtes monachus) is threatend in numbers as most vultures. Good places to find it is Masai Mara and Samburu. The smallest of the vultures is specialized in picking tiny bits of meat from bones with the pincer like beak.

Lappet-faced Vulture (Torgos t. tracheliotus) is the largest vulture in Africa. It is them who are needed to tear open the tough skin of an animal that died naturally and predators had not opened. They breed on top of trees.

White-headed Vulture (Trigonoceps occipitalis) is critically threatened. Despite it occurs in many regions South of the Sahara it has become very rare to spot one. Photo Per Holmen

White-backed Vulture (Gyps africanus) is critically threatened (poisoning is one big reason). They are found from West to East and Southern Africa. At some places you still find a nice number at kills.

Rüppel’s Vulture / Griffon (Gyps r. rueppelli) is also critically threatened for the same reason. The distribution of this subsepecies is in Kenya, Uganda, Tanzania to East Sudan. They are often together at the same kill than White-backed Vultures. One breeding place is on the basalt lava cliff in Hell’s Gate.

A short clip how vulture behave at a kill

Subfamily Circaetinae – Snake-Eagles, quite large birds with roundish heads, a piercing look and no feathers on the lower tarsi

Black-chested Snake Eagle (Circaetus pectoralis) is found from deserts to savanna from the horn of Africa to Southern Africa. Photo Per Holmen

Brown Snake-Eagle (Circaetus cinereus) is widespread in savanna and woodland in Africa.

Bateleur (Teratopius ecaudatus) is a very interesting bird. Young remain brown for almost 7 years not to trigger to be chased out of the territory. Young are found on carcasses together with vultures. Widespread in Africa’s savanna. Morphs with rufous or grey backs. Female and male differ in colour.

Western Marsh Harrier (Circus a. aeruginosus) is a palearctic migrant from October to April. It is found from West to Southern Africa in marshes and swamps. Photo Lorenzo Barelli

Pallid Harrier (Circus macrourus) is an uncommommon palearctic migrant and  can be found in grassland from October to April. Photo Jacques Pitteloud

Montagu’s Harrier (Circus pygargus) is a widespread and quite common migrant to Africa’s savanna and grassland from October to April. Photo Janet Barelli

African Harrier Hawk / Gymnogene (Polyboroides t. typus) is widespread in Africa. They raid nests from trees or hang on a stem with their adapted double-jointed legs and pick chicks out of tree holes. Occasionally they also feed on rodents. Young birds are brownish for a couple of years. The yellow patch in the face can change to orange depending on the bird’s mood. Feasting on a rat

Subfamily Perninae – a number of medium seized, broad winged raptors. Most of them are mainly feeding on insects.

European Honey Buzzard (Pernis apivorus) is an uncommon migrant to Africa. It is specialized to feed on bees. Photo taken near Malindi.

Chanting Goshawks – Subfamily Melieraxinae
3 species, 2 of them in Eastern Africa

Dark Chanting Goshawk (Melierax m. metabates) occurs in western Kenya, Uganda and Northern Tanzania. They are uncommon but good chances to find it are in the Masai Mara.

“True Hawks” – Subfamily Accipitrinae
subfamilies are subject to authors. Melierax sp. Might be in this subfamily

Bat Hawk (Macheiramphus alcinus anderssoni) is uncommon in woodland from Ivory Coast to Mocambique. Their main diet are bats, but also Swifts and therefore they are crepuscular and nocturnal. While roosting during day time they are often overlooked. Photo Jacques Pitteloud

Gabar Goshawk (Micronisus gabar aequatorius) is found in woodland also in semi arid areas with some trees from Ethiopia to Mozambique. Main diet are birds. On the right is an immature Gabar Goshawk.

African Goshawk (Accipiter tachiro sparsimfasciatus) is the subspecies in forests from Ethiopia to Mocambique. Quite common. Photo Per Holmen

Ovambo Sparrowhawk (Accipiter ovampenis) is a rare raptor found in savanna and tall woodland from West to Southern Africa.  In Kenya chances might be highest in Masai Mara.

Shikra or Little banded Goshawk (Accipiter badius sphenurus) is a common resident and nomad in many parts of Africa. This subspecies is found from Arabia, DRC to Northern Tanzania. Habitat: Savanna and woodland. Photo Sandra Stüppardt

Buzzards – Subfamily Buteoninae
medium to large broad winged birds of prey. Some are residents, some migrants

Common Buzzard (Buteo buteo vulpinus) is a common migrant and spends the northern winter in savana and open country from Northeastern to Southern Africa.

Augur Buzzard (Buteo augur) is probably the most often spotted buzzard in highlands from Northeaster to Southern Africa. Juveniles are often confusing. Dark and normal morph with white chest co-exist. Both have the rusty-brown short tail. Photos by Jacques Pitteloud and Lorenzo Barelli

Grasshopper Buzzard (Butastur rufipennis) occurs from West to Eastafrica in savannahs. They are commion intra-African migrants. Photo by Lorenzo Barelli

Lizard Buzzard (Kaupifalco m. monogrammicus) is found in forests and wooded savanna in Ethiopia, Uganda and Kenya exept in the South. They are mainly coastal bird and sparsely distributed inland.

Eagle – Subfamily Aquilinae
Mostly large, majestic birds that perch and soar. Their wings are fairly broad and their legs feathered. Young or immature birds are often hard to identify since the coloration differs.

Greater Spotted Eagle (Clanga clanga) is a vulnerable and scarce migrant to the horn of Africa. A breeding place is in Eastern Poland. Immature bird, Photo by Jacques Pitteloud at Lake Naivasha

Lesser Spotted Eagle (Clanga pomarina) is an uncommon migrant to savannahs in Africa from October to April. One bird with 1 blind eye has been visiting Nairobi National Park for the last few years. His name is “Blinky”.

Steppe Eagle (Aquila nipalensis orientalis) is a common migrant from steppes in the far East. Sadly many get killed by hunting or electrolution hence the species is endangered. They migrate huge distances! Photo Lorenzo Barelli

Wahlberg’s Eagle (Hieraaetus wahlbergi) is an intra-African migrant. It is one of the smallest among the brown eagles. In flight the wings are rectangular and the yellow gap is not straigth.

Tawny Eagle (Aquila r. rapax) is one of the most common raptors found in savannahs of Africa. They hunt, steal other bird’s prey or pick from carcasses. Several color variations occur. In Northern Kenya and further North you find the subspecies Aquila rapax belisarius (photo on the right from Samburu)

African Hawk-Eagle (Aquila spilogaster) is uncommon in woodland and Savanna. They are often seen in pairs. Photo Lorenzo Barelli

Booted Eagle (Hieraaetus pennatus) is a small uncommon migrant from Asia to different habitats in Africa. They breed on cliffs. One small population breeds in South Africa. Photo Jacques Pitteloud

Ayres’s Hawk-Eagle (Hieraaetus ayresii) can be a resident or intra-African migrant. It is an uncommon species in woodland and forest. Photo by Ivo Zafirov

Long-crested Eagle (Lophaetus occipitalis) is easy to recognize with the long crest feathers and the white patch on the under part of the wings. It occurs in wooded areas in many parts of Africa.

This young Martial Eagle was feeding on a Helmeted Guineafowl in Samburu. It is clearly visible that to protect the eyes from strong sun light they close the 3rd eye lid. Many birds have these “sunglasses” which is called translucent nictitating membrane.

Herons and Egrets from common to rare 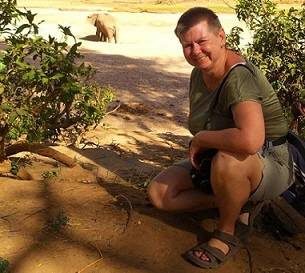